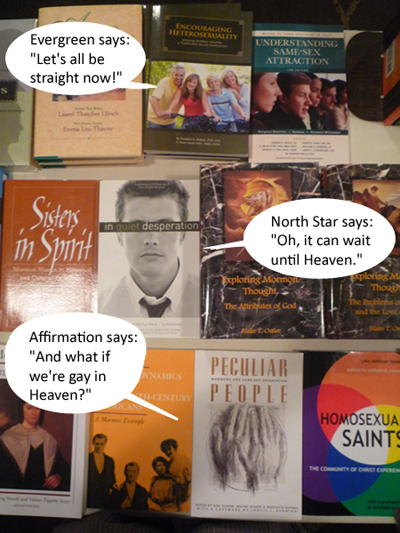 Sunstone was an interesting experience for me. I was there Friday and Saturday, and Saturday morning I presented my paper “Two Paradigms for ‘Gay’,” which compared themes/reception of Langford’s No Going Back (which if you overlay onto the categories at the right, takes a North Star-like stance), and my novel Ockham’s Razor (which takes an Affirmation-like stance).

The presentation itself went very well, and will probably translate into some sales (for example, Michael Quinn came up afterward and asked for my website). Hugo Olaiz, website administrator of Affirmation, also expressed further interest in doing an interview and spoke fondly of my novel on more than one occasion… (I love Hugo. So personable.)

I went to lunch with some folks and heard some insider gossip. For example, Langford’s novel was pulled from BYU’s shelves because of Dean Byrd. This means that Byrd (who would be backed by someone like Boyd Packer or Bruce Hafen) still actively prevents the distribution of alternative voices. By alternative, I do not mean that someone like Ty Mansfield who is already well-known within the “gay Mormon” world, and who has reviewed Langford’s book positively, does not have his own kind of clout; rather, Mansfield and North Star do not have that much power to sway discourse for the Church generally. And well, it was Byrd who introduced Hafen at Evergreen’s conference last year. And something more interesting, and insider-ish, is that the GAs were not happy with Hafen after his speech, because he stepped too far out on his own accord. From what I understand, he has been relocated.

To know that the GAs are not happy with another GA takes a bit of insider status, because the public face for the Church is meant to be monolithic and all the GAs are meant to be in agreement (which explains why Hafen’s speech remains on the Church website). Anyone who knows how the GAs really feel on a particular matter, or how they squabble on a particular stance, is an “insider.” For most Mormons, this squabbling is moot; they would rather uphold the notion of GAs as prophets (and how can prophets “squabble?”). To not uphold them this monolithic way gives many Mormons a visceral feeling of vulnerability. A GA could say, “This is a Mormon play, so I want those colored kids replaced with white kids,” and people will quietly obey, seeing the racism, but at once forgiving it, because the man is a church leader. This movement toward a monolith is poison, IMO. John Gustav-Wrathall has mentioned that “masculinity” in Mormonism includes the ability to be obedient, and that is fine to an extent — I respect humility. But humility has its place. There is a lot of value in making power dynamics clear, even if you do so quietly.

Insider gay male Mormons who are married and hold important callings might also hold knowledge that can’t be made public, often including their own sexualities, or their contacts might drop away, fearing for their own piece of the Mormon pie. I know a lot of folks don’t view the pie as a “pie,” but I think people are blind to their privilege and/or mistake “the power to define what constitutes faithfulness” with “faithfulness” itself. In his presentation, John put it this way: “Spiritual immaturity is when one assumes that communal error makes the Church false. Spiritual maturity is when one can entertain the possibility that communal truth might be false.” I guess I would side with someone like John who as an excommunicated person has really no power in the Church, but hopes to change hearts and minds through one-on-one discussion. I have no power in the Church (not really interested in it) but I still see outlets to create change, because I see how the power works and can speak to changes in discourse as an “outsider.” Yes, the GAs who make policy are the most important ones to sway, and you can’t just barge into their offices unless you have clout, but the GAs must ultimately bow to the membership as a whole. (I also think Mormon policy on the topic of homosexuality is unsustainable because of forces outside the GAs’ control — i.e., gender dynamics in twenty-first century America and changing discourses about the place of sexuality in marriage.)

The weekend was fascinating for me as a younger gay, not-all-that-Mormon male primarily interacting with older gay males who are very Mormon. One thing I noticed was how often the Holy Ghost came up to describe personal affirming revelation. Gustav-Wrathall mentioned in his presentation that the Church literally pulls gay Mormons in “two,” but I couldn’t help but feel that this “Holy Ghost” was a continuing feature of being “pulled in two,” a mind split by a heterosexist culture. I do not wish to step on these gay Mormons’ religious experience, but I wouldn’t need a Holy Ghost to tell me that I’m equal to other church members. Why can’t this Holy Ghost be a little more helpful by perhaps speaking to ignorant church members? In my novel, the character of Micah puts it this way to his mother: “I don’t exist so that people can learn to treat me the way they should already be treating me.” John does plan to publish a book about his religious experience, but there is a real question of: “If you’re considered outside the Church, then won’t your religious experience be dismissed by those who think you don’t have access to the real Holy Ghost?” John and I talked on the way to lunch, as he was interested in my presentation when I talked about gay Mormon fiction versus nonfiction. The nonfictional gay Mormon narrative can often backfire, but I’m sure John is considering the nuances.

I found myself so wrapped up in these connections that when I was asked if I had met anyone my age (and yes, there were some hawt gay guys my age there), I disregarded the question. “Sex isn’t in the picture if there’s a big age difference,” I was told by my 60+ friend, “which makes talking easier.” This is true, but I also felt not-Mormon enough at times that attraction-being-in-the-picture seemed like a good enough reason as any to potentially connect with those younger guys, lol.

Masks: Its the Longing that Gets You

How Much Space Should we Leave for Homophobia?

SLC: This is the place to be queer!

14 thoughts on “My experience at Sunstone”