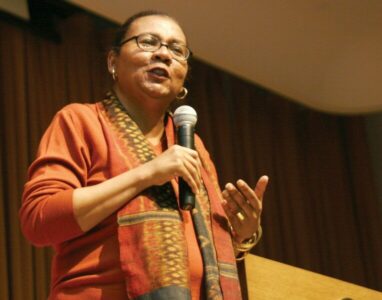 “A culture of domination is anti-love,” black feminist philosopher bell hooks wrote. Without love, she warned, those fighting one form of domination—imperialism, sexism, racism, classism—would find themselves in service to another. Too many Mormons go one further. They invoke love in the service of domination.

Hooks died this month, and I was thinking about her as I listened to the most recent Human Stories podcast. After recording more than a hundred interviews with members of the LDS LGBTQ+ community, host Jill Hazard Rowe, a co-founder of Mama Dragons, interviewed her parents and her son Hunter, whose coming out prompted her into advocacy.

Is there any form of domination more extreme than denying another’s existence?  “It’s so heart-breaking to see families deny themselves of love in the name of love,” Hunter said, referring to the shunning and shaming queer kids receive from those professing support. “They hide it under layers of pity and love and ‘we want what’s best for you,’ which means ‘we don’t want you to be who you are,’ ” Hunter said. “I’d almost rather you say ‘I hate you.’”

“Love and abuse cannot coexist,” hooks wrote in her book All About Love. In her essay, Love as the Practice of Freedom, she refers to African American theologian Howard Thurman who taught that love is best learned as “the practice of freedom in the context of community.”

Contrast that with the conservative Christian injunction to love the sinner and hate the sin. Two decades ago, gay writer Andrew Sullivan called this sentiment “rejection masquerading as acceptance.”

I can think of no better characterization of Jeffrey R. Holland’s infamous August speech. It’s also an example of domination by denial. Holland can’t bring himself to use the word ‘gay’ or acknowledge genderqueerness. After using circuitous language to rebuke BYU faculty who support LGBTQ students and a valedictorian who, in a preapproved speech, mentioned his sexuality, Holland said “let me go no farther before declaring unequivocally my love and that of my Brethren for those who live with this same-sex challenge.” He lauds his own effort “to offer love and hope while keeping the gospel strong and the obedience to commandments evident.” The love Holland offers should go by another four-letter word.

In contrast, the love that hooks recommends is, in the spirit of Moroni 7:13, an invitation to do good.

Public Service Announcement: Please put in your nominations for the Brodie Awards and for X-Mormon of the year.

Pride parades this summer: Will MBB march again, and if so, will they allow signs that advocate equality?