I recently saw the documentary “Who the #$&% is Jackson Pollock” about Teri Horton, a woman who may have purchased a Jackson Pollock painting at a thrift store for $5.

It was a fascinating documentary, with a clear perspective. The crux of the film is that Teri cannot prove that the painting is in fact, a Jackson Pollock painting. Through forensics, it appears as if a fingerprint of Pollock’s is on the back of her painting. Also, you look at the painting, and certified Pollock paintings, and it certainly looks very convincing. In a court of law, it’s possible that this evidence could be used to convict a criminal. Or, it could be faked. Either way, it’s a powerful argument.

I admit I have a soft spot for Horton, seemingly a salt of the earth type of person. And I have interacted with snobby art people in the past. I suppose saying someone is a snobby art person isn’t very kind, but perhaps very opinionated, particular art expert(s) is a better way to put it. The documentary shows the clear difference in class in this country. There are differences in class in the U.S., and it does have to do with education but also socio-economic status.

The tension between the art community and the scientific community in the film is pretty inspiring. And yet MSP readers might ask, how does all this relate to mormonism? Well, first of all, we actually have Teri Horton’s painting which can be studied and examined. It was shown multiple times during the film, and one of the forensic experts had examined the paint type(s) – as well as the paint drippings on the floor of Pollock’s studio. 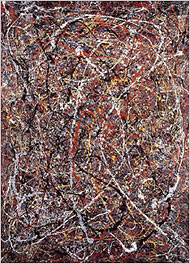 It goes without saying that we cannot see the gold plates that the book of mormon was translated from. Only twelve people claim to have actually seen them (the three and eight witnesses), in addition to Joseph Smith *. They are inaccessible to forensic, scientific and art/artifact communities for study and examination.

Whether or not Teri Horton’s painting was actually painted by Jackson Pollock, we may never know for sure. The fingerprint analysis is still being reviewed. I’m sure there will be continued investigation, and the experts (both forensic and artistic) may continue to disagree. In the end, I don’t really have a dog in this fight. It matters to Ms. Horton and to the art community at large. Perhaps (as I saw on one website), artists will be fingerprinted to make sure that their work is correctly identified.

And it is not out of the realm of possibility that Jackson Pollock did paint the work, and his wife and dealer(s) never knew about it (or never recorded it accurately). The point is, the original work can be studied, today. It can be compared to other works by the artist. It can be sampled for evidence. In the film, they took a section of the painting and compared it with a known Pollock work. It seemed remarkably similar to my untrained layperson’s eye.

And that’s the other thing is Ms. Horton’s favor, to my mind. It is in her interest to allow as many people to review and study it as possible, in order to reach consensus. And consensus can be difficult to reach at times.

It seems to me that it would have been in Joseph Smith’s best interest, or the early LDS church to allow everyone possible to review and test the gold plates. To weigh them, measure them, study them. As it is, that’s not possible (unless the gold plates are somewhere that I wasn’t aware of that independent scientists can review). The burden of proof rests with someone making a claim. Faith in the miracle of the Book of Mormon is not enough for everyone.

*I was pretty certain only the 3 witnesses and 8 witnesses (in addition to Joseph Smith) claimed to see the plates. I could be mistaken, however.