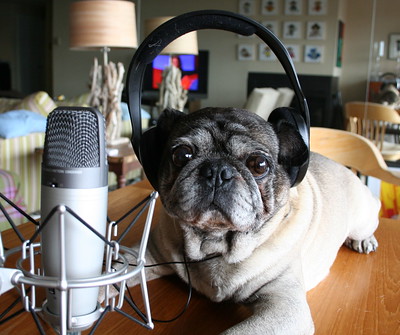 Image: “Roscoe Considers Recording a Podcast” by zoomar is licensed under CC BY-NC 2.0

Mormonland is packed with podcasts. Here’s a random sampling of my listens over the last fortnight.*

(Listen to this one if you have time for nothing else.)

Josh Weed never wanted to be the poster boy for mixed orientation marriages, but that’s what happened when he came out on a blog post 2012, on his 10th wedding anniversary.

In Jill Hazard Rowe’s 100th podcast, he reflects on trying to live ‘righteously,’ learning to live authentically, and helping others celebrate their journeys. (He and his wife, Lolly, divorced in 2018, and are now in appropriately oriented partnerships.)

Josh describes that fateful 2012 post as ‘cosmically led’ – though it was prompted from insight from Lolly, who connected Josh’s writer’s block to him not being open about himself. (Perhaps cosmology was involved in the stake president never getting the email in which Josh said he wouldn’t post if there were objections,)

That post rocked the world for gay Mormons and the people who love them.  There were many reasons, Josh says: people who had been taught that being gay was a choice and abomination could look at a picture of his typical (large, white) Mormon family and see someone who had no reason to say “this is not a choice.”  They heard an active member call himself ‘gay’ rather than ‘same-gender attracted’.

But the 2012 post also let people believe gay Mormons could contort themselves into a straight paradigm. Early on, Jill thought it would be a road map for her gay son. Dancer Benji Schwimmer told Josh it had bent sent to him by more than a dozen people.

Josh said parents have the choice to love their child rather than obsessing over peer approval or doctrine. “I don’t know any parent who has ever regretted the choice to stand by their child’s side and fight alongside them against the oppression that occurs in religious spaces.”

Now married to a man, Josh says “I give every GLBTQ person permission to use my story as a counterexample” to anyone who says ‘if you are more spiritual, this would work.’  “I did all the things,” he says: tithing, mission, calling, church attendance, praying, fasting, and on and on..

Asking gay Mormons to remain single or marry another sex, Weed says, is “the definition of oppression.”  Why? That is “looking at someone and not viewing their humanity, thinking that they deserve something less than you do.”

Questions from the Closet: Am I possessed by an evil spirit?  (35 minutes)

Active gay LDS members describe handling ignorant assumptions with superhuman patience and compassion. Ben Schilaty empathizes that the fact of his existence “can be hard” for members to understand. Comic Adam Berg describes how, in his 30s, a potential cancer diagnosis led him to an agonized prayer in which he told God he hated being gay and heard the reply “but I want you to be gay,” which accelerated his self-acceptance. Charlie puts forth the Moroni challenge for acceptance, urging listeners who have a gay person they love to pray to learn that their loved one’s sexuality is real – he says it’s the same as getting confirmation about the Book of Mormon.

(NB: I love the plea for acceptance, and the optimistic assumption that confirmation bias will swing that way, but the strategy raises alarm bells. How many of us former members felt inadequate when that promise didn’t work?) I resonate more with Ben’s notion that all of humanity should be considered part of the body of Christ, which he interprets as meaning not just tolerating diversity, but embracing it to learn about folks who are different

Questions from the Closet: What factors contribute to LGBTQ+ suicide? (47 minutes)

Ben and Charlie talk to BYU faculty and family counselor Quintin Hunt about the idea that the broad factors leading to suicide are 1) feeling like a burden (and that includes feeling like you’re broken) 2) feeling like there’s no place where you fit and 3) the capacity to enact harm. To become faculty at BYU, you must be interviewed by a General Authority and you can ask questions. So Quintin asked what does being gay or trans mean for eternity? How does it fit? And the GA said “we just don’t know.”  (At least the answer has moved on from Miracle of Forgiveness.)

Active member Richard Ostler interviews a trio of researchers at Northcentral University surveying gay active and former Church members about their experiences. (They hope a second survey will focus on trans people.)  The team includes a gay, faithful LDS man, a lesbian former evangelical now quasi-Buddhist,and a queer LDS convert who wishes she could be active in the Church, but says “I don’t know how to attend Church and be me.”

The LDS researchers really want gay people to feel happy and comfortable in the Church, and each describes their life paths.

Of the ~120 interviews so far, people break into three categories: in the Church, out of the Church, and in limbo, with the last group reporting the highest rates of misery. As a church-attending man, researcher Mark Ward is clearly distressed that internalized homophobia seems to dissipate as people leave the Church. (I’m not sure if the survey was designed to detangle correlation and causation).  He notes recognizing another’s pain is “important in a healing way.” [NB: I hope Ward can get this message to some Church leaders]

The open-ended questions are proving the most insightful in the project so far. One is ‘what you’d like to say to a General Authority’ and a recurring answer is: don’t reduce sexual orientation to sex.

The first survey I know of is discussed in multiple 2014 publications by John Dehlin and Bill Bradshaw and colleagues.

Finally, a four-hour Mormonstories podcast reacts to David Archuleta’s one-hour podcast with Miayim Bialik’s Breakdown titled Permission to Make Mistakes. I bounced from Bialik because SO MANY ADS, so skipped this, but it clearly got a bee in someone’s bonnet.

*I listen to sped-up podcasts on the elliptical or making dinner. So take my summaries (and quotes) as presumptive, not definitive

2 thoughts on “Peculiar Pod-o-rama: mixed- to matched-orientation marriage, and more”